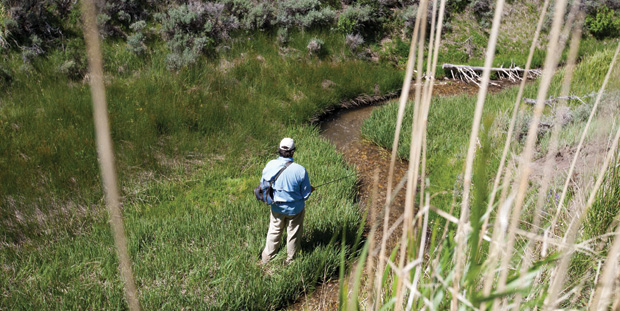 Matthew Copeland visits Little Mountain and discovers big game, native Cutts, and plenty of reasons to worry about the future of this amazing area.

We’re miles from the truck and 600 feet below the canyon rim when the first raindrops dimple Trout Creek. Charlie Card has spent his entire life in this country and guided it professionally since he was seventeen. I figure that makes pulling the plug his call.

“What do you think, Charlie?”

Charlie, who had white-knuckled through the same cliffed-out, gumbo-greased elbow turns as the rest of us, knows the score. All the same, he feigns a sober pause of deliberation before speaking the truth. “We’re not beating this back to the highway. Fish don’t mind.”

Fair enough. I do a quick beer inventory in my head, let the prospects of an impromptu night on the flanks of Little Mountain sink in, then straddle the stream, a boot on either bank and cast to the cutthroat that owns this particular bend. Brought to hand, the native Colorado trout is half as long as the creek is wide, painted like a rodeo clown.

Should we find ourselves stranded by mud, we’ve picked a good spot. Little Mountain tops a folded patch of sagebrush steppe, buttes, and wind-flattened up-sweeps that are classic Wyoming. Encompassing Pine, Miller, Potter, Flattop, Sheep, and Richards Mountains, along with the Green River and Flaming Gorge Reservoir, the Greater Little Mountain Region is a hunting and fishing utopia.

Riding in, we lost count of pronghorn and mule deer and maxed out memory cards with snaps of spotted fawns and velvet-antlered bucks. Stationary, eating lunch, we admired curious speed goats, an indifferent doe deer, a bedded band of elk, and the snowy crest of the Uintas, 100 miles distant.

Had we ventured a few hundred yards farther along the ridge, we could have looked down into the Red Creek badlands and across to Red Creek itself, where two days prior we’d made the acquaintance of the most genetically pure Colorado river cutthroat trout left on planet Earth.

You can fall in love with this country in a day. When you grow up here, however, like Wyoming Wildlife’s executive director Walt Gasson did, it’s a sacred place, where the people of southwest Wyoming go “to get their boots dirty and their souls clean.”

But all is not well in the garden. Two big threats loom above Little Mountain. Over half of the region is currently leased for oil and gas production, and with the economic and geopolitical climates being what they are, pressure is mounting for the consummation of those leases.

Meanwhile, in a boondoggle alternately referred to as “The Big Straw,” “The Million Pipeline,” or, my personal favorite, “The Big Suck,” Fort Collins developer Aaron Million is attempting to exercise a claimed water right by piping 80 billion gallons of water per year from the Green River basin, 300 miles over the continental divide, to the lawns of Colorado’s Front Range.

Enter the Greater Little Mountain Coalition (GLMC), a collection of local citizens, union members, and sportsmen’s groups like Trout Unlimited (TU) that serve as the region’s capable if atypical defenders.

Pat Newell, TU’s local chapter president swapped a workday at the coal-fired power plant for fishing in the rain. The chapter’s vice president works for a natural gas pipeline company. Walt Gasson used to mine trona nearby. These guys fairly represent a conservative, rural community that lives for a time on the mountain, while making their livings in Wyoming’s energy, ranching, and extractive-driven economy.

Like most of their neighbors and the majority of the GLMC’s 1,200 members, they are not anti-development, not anti-energy, and not interested in being called environmentalists. Camo is about as green as they get. But they know a priceless resource when they see it, they know firsthand how easily and irrevocably it can be destroyed by irresponsible development, and they know the value of hard work.

In a state where talk is cheap, TU and the GLMC are putting some skin in the game. They’re working with family ranches to modernize irrigation infrastructure, collaborating with Wyoming Game and Fish Department to remove trout migration barriers and improve beaver habitat, all while pouring countless volunteer hours and some real money into streamside projects.

With each investment, the coalition strengthens the levers they use to ensure that any future energy development is done responsibly and only with fish, wildlife, and recreational opportunities fully weighted in the balance.

As for The Big Suck, the people of Wyoming are glad to contribute suggestions as to where Mr. Million can put his pipeline.

Before long the rain slows, then sputters to a stop. The fishing maintains its rhythm—cast with the best fishing rod and reel combo for beginners, rise, eat, cast, rise, eat—a cutty in every bend. But all good things must end. Back in the truck we successfully navigate the greasy two-track back to the blacktop. If only navigating the future of Little Mountain was so simple.